Home » Blog » Of Poverty and Injustice…

Of Poverty and Injustice…

Posted by Jamie and Alissa on November 21, 2012 in Blog, Uncategorized | 1 comment

Not necessarily a fun topic to think about or address but it’s a killer (quite literally) to live with day in and day out, everyday of one’s life.  Poverty and Injustice.  They happen all around us.  Sometimes we’re aware of them and often times, unintentionally, we’re completely oblivious to the realities that surround the people we live amongst.

Last week I was told about two tragic stories that reflect this poverty and injustice that I’m talking about.  Both involve women who have been a part of the women’s artisan project that we started here in Mahajanga a year ago.

VitaSoa is 19 years old.  She’s married to a 57 year-old man.  1 month before she started the artisan project, their house burnt down in a fire.  Everything they owned in a 1-room tin shack…. gone.  VitaSoa doesn’t know how to read or write.  During her time in the artisan project, she would bring her then 9-month old son, Nikola, to the training.  VitaSoa would  nurse him while using her newly learned skill of maneuvering a pair of scissors.  A month ago, VitaSoa went into the countryside outside of our town to see her relatives.  While there, her now 18-month old son became sick.  He was urinating blood.  VitaSoa used what little money she had to buy Malagasy medicine… bark, herbs, salves, etc in an attempt to treat her young son.  The treatment failed.  Nikola’s life slipped away.  VitaSoa didn’t have the financial resources to help him.  She didn’t have basic health education to know when to take him to the hospital, she didn’t have the resources to get to a hospital and even if she did, she couldn’t have paid for it.  Poverty.  Injustice. 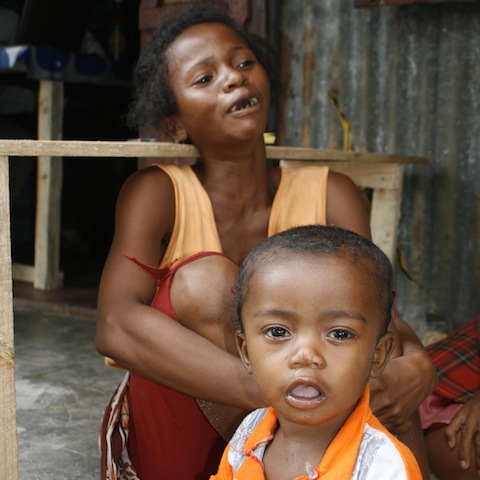 VitaSoa– just one of the many faces of poverty and injustice

Celestine, a young woman of 24 years.  Married.  Living in extreme poverty.  Her husband couldn’t find work.  She started working with the same women’s artisan project.  The only problem, the guy who was sent from the capital city to help oversee the project was corrupt.  He wasn’t paying the women their wages but rather keeping the money for himself.  Scumbag.  (When it was finally revealed, he was fired— we were out of the country).  It was too late for Celestine though.  During this time, Celestine became pregnant with their first baby.  Overcome with poverty and debilitated with despair because of their circumstances, Celestine decided to abort her baby.  Abortion is illegal here in Madagascar and though I’ve never seen their practices, I can only imagine the horror that goes down in a hidden house somewhere.  The abortion was botched.  Celestine died as well.  Two lives gone.  A young husband left behind.  Poverty.  Injustice.

John M. Perkins puts it well; “Poverty, you see, is much more than lack of money; poverty is the lack of options”.  This is true, so very true.  In Madagascar, there is the lack-of-money-poverty but there is also the lack-of-options-poverty that Perkins talks about.  And with poverty comes injustice.

If you want to be better informed about this very real subject, check out the National Bestseller, Half the Sky: Turning oppression into opportunity for women worldwide by Nicholas D. Kristof and Sheryl WuDunn.