This is Madagascar– donating blood edition

Posted by Jamie and Alissa on March 30, 2015 in Blog, Uncategorized | 0 comments

We experienced a devastating loss last month when one of the ladies from our maternity center experienced a ruptured uterus during labor. You can read about that tragic story here.  We praise God that we didn’t lose the mama in addition to the sweet baby girl who never took a breath.  A ruptured uterus is a total obstetric emergency and this case was no different.  Massive hemorrhaging, loss of life, total hysterectomy.

In the past, it used to be that you had to donate blood in order to receive blood– the hospital wouldn’t give a blood transfusion until a member of the family or friend gave blood.  We’re thankful that the rules have changed a bit in our local hospital.  When this mama needed several units of blood, the hospital gave it to her and the family/friends had several days to come back to donate.

The family had 3 people lined up to donate and they needed another 3 people.  Danielle and I volunteered and I took the liberty of volunteering Jamie as well because he’s a good sport and would be totally willing to help out.  We received our instructions from the blood bank….

* don’t drink alcohol the night before the blood donation

* eat a big meal before donating

We figured we could handle these little rules.

Two days later, Jamie, Danielle, Neal and I all headed into town and up to the hospital.  We checked into the blood bank– an actual building that is pretty nice for African standards.  I know it certainly beats the dilapidated dark musty room that used to be home to the “blood bank” at the same hospital.

After the normal pleasantries and questions involving why we speak Malagasy, shock at how good Jamie’s Malagasy is (total fluency with that guy), what we’re doing here, etc, they asked for some form of legal identity. The lady at the desk took down our information, made the normal 4-5 required stamps to make something fully legit and then gave us back our passports.

Another lady, speaking surprisingly good English came in and asked who wanted to go first.  I offered and asked if Jamie and I could come at the same time.  She gave me a silly look and with a straight face proceeded to say, “oh no, husbands and wives can’t come in together”.  Her reasoning… because there’s lots of personal questions that are asked and perhaps we wouldn’t be honest with the other around.  Despite our protests, she wouldn’t budge.  Danielle and I walked in together and sat in separate glassed-in rooms to answer our very “personal” questions.

Jamie and Neal came in after Danielle was ushered to the blood donation room and I was sent back to the waiting room— totally denied with the opportunity to donate blood because I had taken some routine medication earlier in the morning.  Clearly, that wasn’t in their little set of instructions along with the no drinking of alcohol and getting enough sleep.

A few minutes later I moseyed on back to where the guys were… hoping I could persuade the lady to let me give blood.  There Jamie and Neal were sitting in their separate glassed-in rooms answering the very “personal” questions.   For whatever reason, the lady speaking good English was talking to Jamie while the lady that didn’t speak any English was interviewing Neal.  Every once in awhile Jamie would translate for Neal and relay to Neal that he said some totally obscure thing… you know that Neal suffered from a 3rd testicle or something.  There was a lot of laughter happening in those little rooms.  But then all seriousness when the guys individually responded that they weren’t sleeping with any women other than their respective wives.  The lady talking to Jamie simply didn’t believe him, saying, “come on… you’ve gotta have Malagasy girls on the side”.  Again, Jamie said “nope” and again the lady said, “really– not even 1 or 2?”.  Unfortunately that IS the reputation of the large majority of foreign men here.

The guys were ushered to the blood donating room and both took a chair, feet up and settled in for what in the end wouldn’t be very long.  I joined them to watch with eagle eyes if they were using sanitary practices– which of course, there were not.  Meanwhile, Danielle was already finished and enjoying a coke and cookies in an adjacent room.  One older nurse was sitting at the desk facing the two guys, a lab tech was standing around… seemingly bored or unsure what to do and then another nurse attended to the guys.  That nurse took out one of the largest needles I’ve ever seen— and proceeded to drive that thing deep into Jamie’s arm and the blood began flowing.  She moved over to Neal and did the same thing. 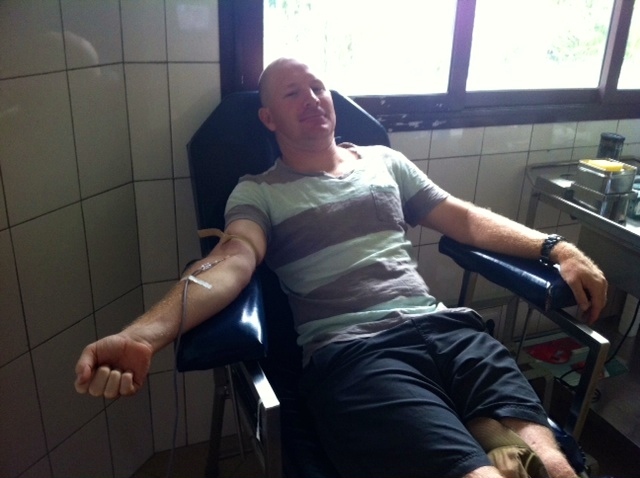 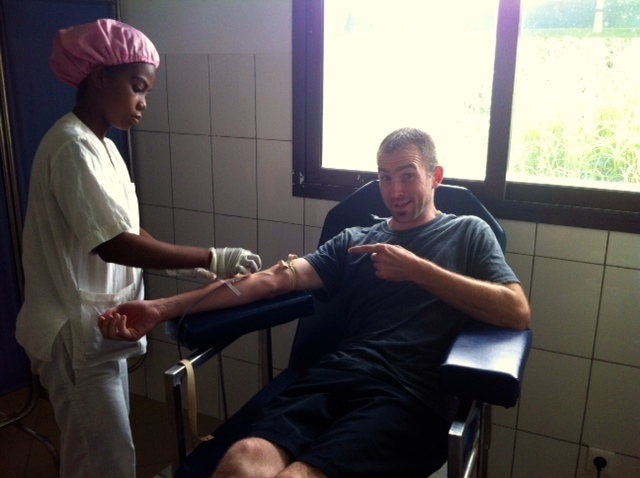 In the corner of the room, there was a small black and white TV with the picture flickering in and out of an American movie dubbed into French.  I was standing there between the two guys who were emptying their blood into bags when all of a sudden I started hearing some noises coming from the TV… those kind of noises… sure enough I turned around and there’s an all-out sex scene happening.  If you know me well, you know that there’s nothing prudish about me– so really this was just more comical than anything.  I turned back to face Jamie and Neal and kept talking to them.  Other than the three of our voices and those kind of noises, the room was dead silent because by that time, all of the staff, including the old lady at the desk had stopped whatever they were previously doing and their eyes were transfixed to the flickering TV and the raunchy sex scene.

As the bags filled with the guys’ blood, one of the nurses said to the other, “make sure you get all of that vazaha (foreigner) blood… it’s good stuff!”  Sure enough, within 5 minutes those bags were loaded full and fat.  The needles were taken out, gauze and tape placed on the site, the raunchy sex scene over and the guys were ushered into the recovery room for their beverage of choice and cookies.  We joined Danielle in the recovery room and began recounting the less-than-quality standards, the comical translations thanks to Jamie, the movie, the gruesome size of the needle and on and on.

Before leaving, we received some more rules to help the three build up their blood supply again… 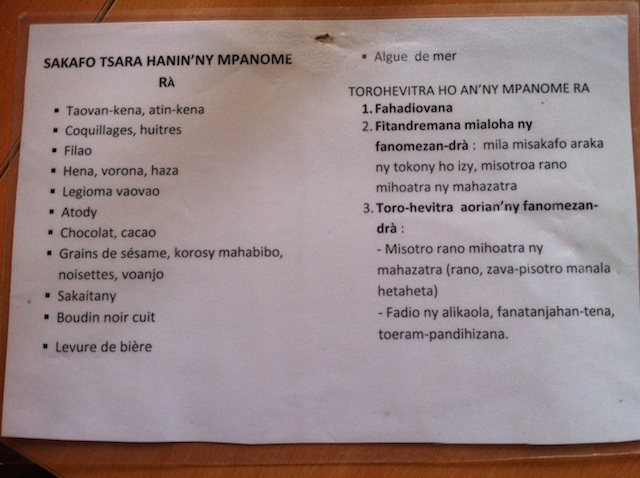 The blood bank workers thanked us for the donations and eagerly asked for us to come back monthly for more of “the good stuff”.