Home » Blog » Even in riots and betrayal… (and a video update!)

Even in riots and betrayal… (and a video update!)

Posted by Jamie and Alissa on December 6, 2016 in Blog, Uncategorized | 0 comments

In all things and in all ways… give thanks!

Give thanks… even in the riots

The month of November started amazing as we were wrapping up a much-needed vacation with my folks and our teammates on the beautiful island of Nosy Be!  You can read more about that here. 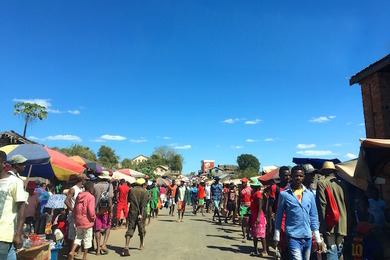 Our vacation abruptly came to a halt when we found ourselves at the center of a riot on the drive home. Literally. The 14 of us were piled in two cars and had been driving for about an hour after having pulled off on the side of the road to find some shade and eat our packed lunches.  Jamie and my dad were in the backseat, Jamie asleep, and Gavin sitting between the two of them.  I was driving, my mom sitting co-pilot in the front seat with Isabella between the two of us. Neal and Danielle and their three kids along with Eliana were bringing up the rear of our two-car caravan on the pot-filled two-lane road that is the national highway.  As we entered into a small town, Mampikony, there were people on both sides of the road. Nothing uncommon about that as life happens on the side of the road… market day, sellers, kids playing, people sitting and talking.  However what was different was the vast amount of people.  I had an uneasy feeling and decided to lock the doors of the car.  Within seconds there were also people in front of the car blocking the road.  As its not a road we drive often, I said to Jamie, “where am I supposed to go?”  My question stirred him awake despite his groggy state.  He rolled down the window and asked someone.  People started pointing in all different directions and then suddenly, something came flying at the front of our car and smashed into our windshield.  This was followed by more objects… mangoes, dirt clogs, rocks… all thrown by angry young men in front of us.  Meanwhile and unbeknownst to us, Neal and Danielle’s car was also getting pummeled with rocks and bricks from the sides and back.  It was when a massive rock was thrown directly at our windshield and broke on the window right in front of Isabella’s face that I decided to make a road through the people and took a sharp right turn and barreled down a dirt road as people were scattering in all directions in front of our car.  Neal and Danielle fled just as quickly with homemade fireballs being thrown at them as they sped through the crowd.  Even after escaping the immediate threat, some people continued to chase after our cars as we sped away. About 2 kilometers away from the riot, sitting on the side of road at their post were two gendarme (armed police).  We stopped to let them know what was happening and with a shrug of their shoulders and a non-concerned look on their faces, they said, “ok”.
As we processed the quick and scary turn of events in the remaining hours of our drive home, it was apparent that we were in the wrong place at the wrong time and a bad situation was quickly escalating.  It was also very apparent that the Lord protected each and every one of us– three generations, 14 lives, 6 young missionary kids! We drove away with only dents in our cars.
Two days later we found out that when we had passed through Mampikony it was the very beginning of what turned out to be a three-day violent and deadly stand off between the community and the police.  Rumor has it that the community was tired of the police backing some hard-core thieves time and again.
This was an absolute first for us. Typically we feel very safe in Madagascar.  Jamie shared it well when he said, “this is the first time that Madagascar has turned on me, threatened me and my family”.  And yet, the Lord is good. He gave me a premonition two weeks prior on the drive towards our vacation about what to do in the event of people dangerously crowding around the car as we were passing through a small town.  It wasn’t until after the event that I had remembered the Lord’s forewarning in this way.  And so, even in this scary situation, we give thanks to the Lord for His protection, His mercy and His care of us.

Give thanks… even in the betrayal

Even though the riot was scary and dangerous and felt in some ways like a betrayal from the country and the people that Jamie has known his whole life, the Lord has given us peace through it all.

What we didn’t expect was a deeper betrayal that we fully uncovered when we came back from vacation and got back to work and ministry.  To make a very long story, very short… we played detective and uncovered multiple lies upon lies concerning one of our health educators at the Sarobidy Maternity Center.  For two years, the maternity center had been helping her financially with her midwifery education after she shared with us her desire to begin midwifery training.  At the time, it was an answered prayer that a woman who we had known for over 10 years and who had already been invested into the maternity center and embodied the ministry of loving women and babies, wanted to become a midwife!  What we uncovered over several days and countless hours of confronting the person and the situation, was that she in fact hadn’t been actually attending midwifery school but rather was paying off a teacher in all essence, the buy her degree, meanwhile slipping half the money into her own pocket!

We spent hours in prayer, in fasting, in worship with our core leadership team of Malagasy and American ministry partners over this situation.  The Lord has been faithful and we believe He graciously directed our steps in the path to take concerning this horrible situation.  We would never ask for this type of betrayal nor the deep sadness that comes from it but even still, we give thanks to the Lord for His wisdom and His peace in this hard situation!

Give thanks… even in the drama

As if those two situations don’t carry enough drama, there’s even more excitement flying around here with a current active investigation of money laundering of someone close to us.  And…. just this past Monday, a horrendous chase of thieves into the backyard of our community that ended in gunfire, retaliation and ultimately, death of a few innocent bystanders as well as two of the thieves.  One of our dearest Malagasy friends helped to stop the thieves in their tracks which allowed the police to capture them.
If you’ve been reading our newsletters over the years, you know that we typically try to keep our writings for the most part on the lighter side, sharing all the awesome stuff that the Lord is doing while at the same time, attempting to be transparent in this public forum about some of the hardships. To be quite honest, sometimes life feels like we’re in the midst of a soap opera all around us… and yet, this is regular life in Madagascar, daily life in a third-world country where poverty and corruption and desperation reign.
Even still, we thank the Lord for allowing us to be HERE, to be in Madagascar, to be walking with our Malagasy friends and co-workers and American ministry partners– to be caring for pregnant moms and babies together, to be reforesting this barren island together, to be the hands and feet of Christ as we share His love with others together. We are thankful to God for each of you as you generously and graciously partner together through your prayers and finances for this work here!

Give thanks… definitely in the provision

Some FANTASTIC news is that earlier this month we signed the papers for the purchase of the Sarobidy Center property! We’re still in the process of finalizing all the details but we’re oh so close!!  We give thanks to the Lord for his provision– He used your generosity and the generosity of two grants to reach 100%!!!! 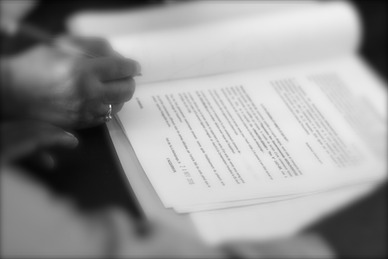 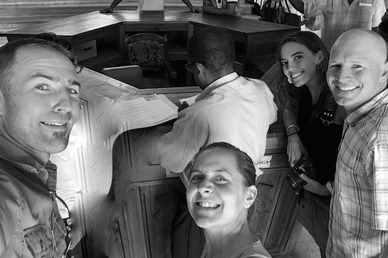 Give thanks… most definitely for the friendships!!!

Even though it was 5 days after the fact, this past Tuesday we were able to come together as 33 American adults and kids to celebrate Thanksgiving!  The food, friends and feast were all incredible! We give thanks for the gift of fellowship with other Americans here in our city! 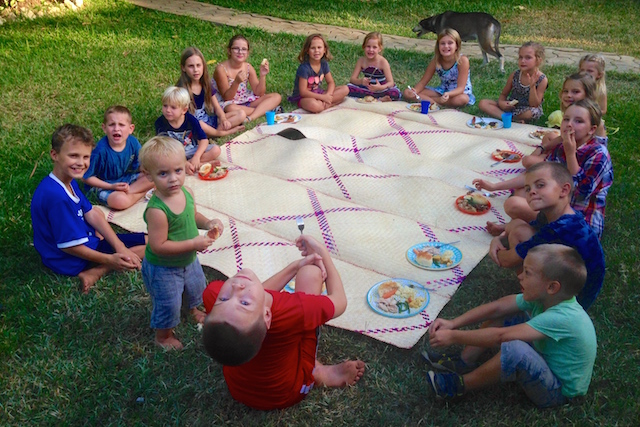 Give thanks… for the ministry

We give thanks for the ministry that God is doing in our midst!!  Click here to see our latest video update of the ministry of Red Island Restoration! 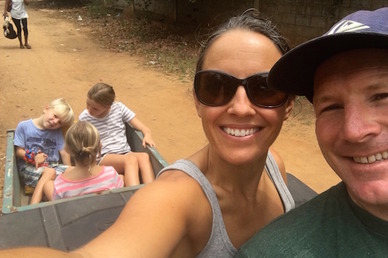 Give thanks… for the women and babies 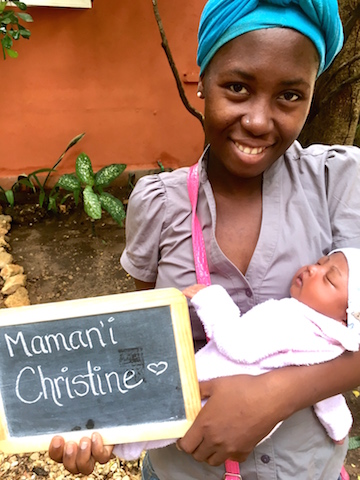 We’re so thankful for the women and babies that the Lord continues to bring in abundance to the Sarobidy Maternity Center! One of the massive problems we see each week is the extreme malnutrition that our ladies experience day in and day out, year after year.  As a result we’re also seeing a high number of postpartum hemorrhages– sometimes so severe that we have to conduct an emergency transport to the hospital in our ambulance!
Here’s a note from our teammate, Danielle, about our dreams to address this dire problem…

“I’ve been wrestling with the idea of a “feeding program” for a while, some way to address the severe nutritional deficiencies we see in our patients.  It’s a big step of faith as there is no money in the current Sarobidy budget to fund this program.  Starting January 2017, we’d love to launch this feeding program for our momma’s and their children.  Twice a week we will offer a healthy, balanced, FULL lunch.  We anticipate feeding over 100 tummies twice a week!”

Click here to read more of Danielle’s vision behind this awesome and much-needed new project!
In all these things and in all ways, we give thanks to the Lord for He is good!
Alissa, Jamie, Isabella, Eliana and Gavin