Posted by Jamie and Alissa on November 14, 2011 in Blog, Uncategorized | 0 comments

Mahabana is a small yet growing fishing village 120 miles south of where we live in the large city of Mahajanga.  When Jamie first went to Mahabana in 1999, the village consisted of just 100 people; today, it’s home to close to 400.

After living there, Josy, a good Malagasy friend, took Jamie to Mahabana for the first time in 1999 with the hopes of good fishing and the chance to share the sweet message of Christ.  Just prior to their arrival there was a house fire that killed 2 people.  When Jamie and Josy arrived in Mahabana, the people were gathered together to discuss the taboos in the village as an explanation of why the people were killed and to make sure the taboos were being followed.

Taboo #2:  You can’t work in the mangrove channel on Tuesdays.

Taboo #3:  Vazaha or foreigners.  Though with Jamie’s presence, it was quickly clarified that it was “military foreigners”, thereby allowing Jamie to stay.

In order to understand the depth of such taboos, you should know that taboos in Madagascar literally control the lives of the Malagasy as they follow these in order to appease and seek favor from the ancestors.

Little did the people gathering know, Jamie and Josy had 12 Bibles in their backpacks.  After living there for 2 weeks, Jamie and Josy wanted to start a small Bible Study.  They prayed for 1 person to come, asked 2 people to attend and yet God brought 12 men and women!  Immediately the people of Mahabana directly opposed the Bible study through verbal threats and spiritual curses.  A month after the start of this study, one man, Florent, stood up and said, “I’d rather live in the light and be persecuted than to live in the darkness”.  Florent is a key member of the church to this day.  Another man, Dina, said, “I’ve been reading my Bible and I’m sad to think of my life.  I want to follow Jesus”. Today, Dina is a key leader in the church, in the reforestation projects and the elected president of Mahabana.  Despite extreme opposition, the small group of 12 believers, couldn’t contain the joy, hope and freedom they found in Christ.  The light of Christ was beginning to shine on this small peninsula that had been steeped in darkness for generations.

Fast forward to today… 12 years later, the church is flourishing, the Christians are thriving on multiple levels, the taboos are collapsing and the grip of darkness no longer permeates the village.  Sadly, there is still opposition to the Gospel, however it is only by a few.  Those that aren’t following Christ are undeniably witnessing the power of God at work in the lives of the people around them.  So much so, that only a few claim that the village is still taboo Jesus Christ and the Bible.  Christ is the Victor 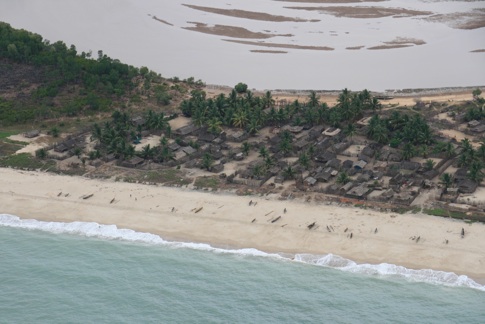 Mahabana, as seen from the air today (ocean on one side, mangrove channel on the other side)