Posted by Jamie and Alissa on April 9, 2011 in Blog, Uncategorized | 0 comments 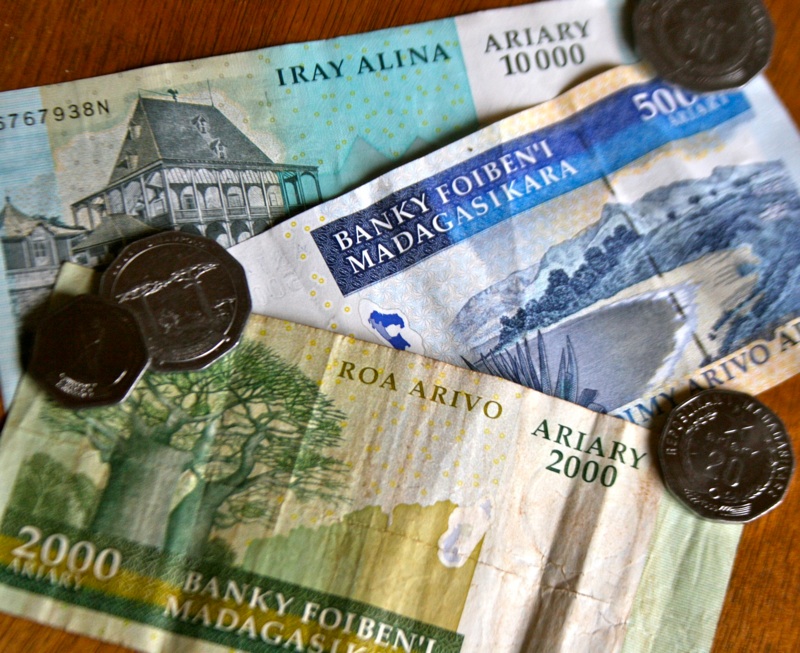 Money is an interesting thing here in Madagascar.  Though we have been paid for medical services in the form of livestock, fruit and/or vegetables before, this quite obviously is not the standard.  Malagasy money has quite the history of changing on several occasions.  For example, when we lived here before, we used the Malagasy Franc (MGF) but in recent years, the currency has returned to the pre-colonial Ariary.  The Ariary is 1/5 the amount of the Malagasy Franc and from time to time, people still use the Franc so one needs to quickly do some math so as to not overpay 5-fold.  The highest Ariary bill is 10,000Ar which is the equivalent to roughly $5.00 whereas the smallest coin is 1Ar which is the equivalent to the half penny that was issued in the USA between 1793-1857.  Cash is king in Madagascar and outside of the capital city, there are few places that take credit cards.  For example, in the town we live in, there’s only 1 store that we know of where we can use our VISA card.

So where do we get cash?  Well, there is the bank of course but we can’t use the bank because we don’t have an account… though from time to time, we do use the ATM.  But for the most part, we wait until we’re in the capital city and exchange money with a local businessman.  The process sounds a bit out of a mafia movie: we call ahead to say we’re coming, we walk into a private office with one-way glass, sit down in front of a large desk, write a check for the amount and sign it, but leave the check blank in terms of who it’s written to and the date.  We then receive a stack of bills, place them in our backpack and walk out.  6-8 weeks later, our check is cashed.