Posted by Jamie and Alissa on May 2, 2016 in Blog, Uncategorized | 0 comments 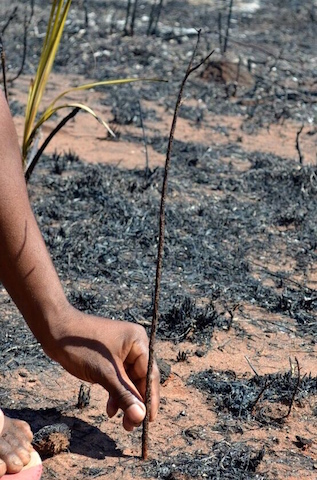 Deforestation in Madagascar is estimated between 88-90%– quite the staggering rate!  The two largest culprits of the continued destruction of the forests are 1) charcoal production to be used for cooking and heating purposes and 2) slash and burn farming.  When traveling on the two-lane national highway during the dry season, one can easily count 15 or 20 plumes of smoke from various areas dotting the landscape.  Of course with continued fires comes loss of tress but also further erosion, loss of nutrients in the soil, a change in rain patterns, and diminished output of crops– all of which lead the Malagasy people into further extreme poverty.

Just this week there was a large fire adjacent to one of Eden Project’s dry deciduous reforestation sites north of our city.  Though the cause is still unknown, it’s suspected to be from charcoal production several miles away.  In a country where there isn’t fire hydrants nor fire trucks and in an area where there isn’t running water, the men employed by Eden Projects in the surrounding village as well as other villagers became the firefighters and their hands became their weapons.  Twenty men pounded the flames with satrana or windmill palm branches through the night and into the next day.  As a result of their heroic efforts, they were able to prevent most of the fire from jumping the fire break.  The embers that did make it across the road were quickly extinguished.  In the end, only a few acres were lost to the fire in the Eden planting sites compared to hundreds of acres on the other side of the fire break!   Click here to read the full story…. and other exciting April news!